Getting the point without seeing the big picture

Last Friday I visited the Portland Art Museum. It was eerily quiet, so I was able to linger over individual pieces without feeling pressured to move along. Lingering is good; on the other hand, there was no “flow of traffic” to guide me. In empty galleries, I tend to wander inefficiently around, and inadvertently approach pieces from the least effective direction – I’m the kind of haphazard visitor that curators dread. And when I rounded a corner and encountered Richard Notkin’s 1999 sculpture, “The Gift,” sideways and from an arm’s length away, at first I didn’t register what I was seeing.

“The Gift” is a large grid of individually cast ceramic tiles depicting stylized skulls, heart tissue, ears, bricks, what looks like brain tissue, and dice. This is what an individual skull tile looks like: 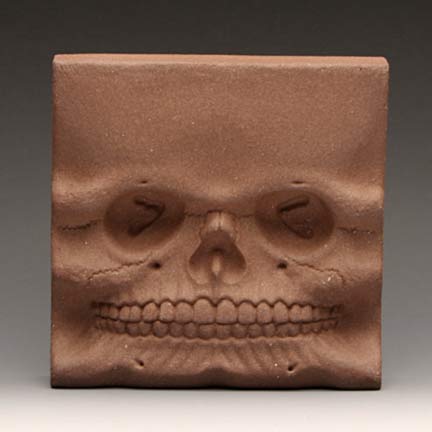 The overall effect of hundreds of these tiles together was completely memento mori: flesh, time, death, randomness, fate: it doesn’t get more obvious than that. The skulls, in particular, reminded me powerfully of Mayan architectural motifs – the tzompantli at Chichen Itza, or more generally the square grids of glyphs on Mayan stelae, which frequently include portraits of gods or rulers. This association with a dead culture, especially one with some rather bloody sacrificial rituals, made “The Gift” even more clearly about the human capacity for self-destruction. The title, I thought, was tragically ironic.

Overall, the piece was sinister enough to prompt me to make a note of it, intending to look the artist up later on the internet. I happily wandered away, without ever stepping back to get the big picture.

Today, I looked “The Gift” up. Apparently this is how the complete installation of over a thousand tiles looks, when seen properly from the front, as I didn’t bother to do: 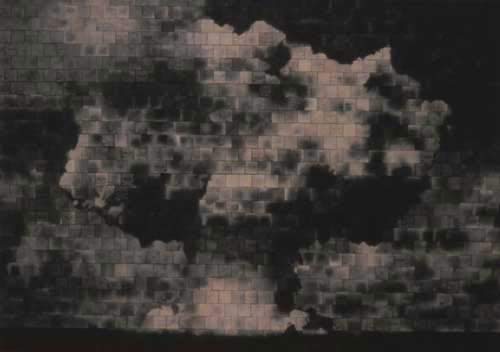 A more recent work by Notkin, “All Nations Have Their Moment of Foolishness” (2006), also uses individual tiles as “pixels” in a larger image – an image less sinister than Hiroshima, but definitely disturbing.

A streaming video of Notkin talking about his work, including his best-known ceramic series, the “heart teapots“.

This entry was posted in Artists & Art, Museum Lust. Bookmark the permalink.