Last year I posted this essay on the awe-inducing power of murmurations, in which I mused on the relationship between awe and fear:

When I’m lucky enough to witness dramatic natural phenomena (or even something as quotidian as an undiluted, infinitely deep, mountain night sky – c.f. Hungry Hyaena, on the Hubble telescope), I’m struck by an overwhelming sense of immensity, mystery, and awe-fulness. . . murmurations, starry skies, and similar phenomena tend to make us less conscious of our bodies, blurring scale and time, reminding us how insignificant we are: an effect viewed by many as profoundly spiritual and sublime.

Last week, I ran across this Atlantic article on the experience of awe, which touches on the same themes — particularly the concept of “perceptual vastness”:

It can be hard to generalize what people consider jaw-dropping, but Vohs says research demonstrates what consistently creates an awesome experience. Travel ranks high. So does gazing at the cosmos on a clear night or watching a sensational film, as well as anytime we encounter massive quantities: colorful tulips in bloom, a bustling market in India, or a stunning school of fish.

Novelty and perceptual vastness forces us into the present moment. The study underscores the importance of cultivating small doses of awe in the everyday to boost life satisfaction.

“Awe is quite threatening in certain ways, and something that is challenging and unwelcome can border on fear,” says Vohs, recalling an astonishingly big fish he saw while swimming in the ocean. “It was giant—no big teeth, and it seemed like a gentle soul just floating in the water—but still!” (source)

My reaction to the Atlantic article was pretty mixed. Most of us probably agree that “perceptual vastness” is awe-inducing — that’s why the starry night example is so commonly used. I agree that proximity to a giant, silent fish could totally be awe-inducing (whale-watching is, for sure). But watching a film? Looking at flowers, a market, parades? These things are visually stimulating and novel, but I don’t think they are awe-inducing.

And that made me realize to my surprise that I rarely find art, literature, drama or music “awe-inducing.” I find these things delightful, exhilarating, and thought-provoking, but I’m far more likely to be awestruck by nature, or by modern architecture, like bridges, skyscrapers, or airplanes, because I can’t grok the physical forces and scales involved in creating those things. I’m awestruck when I see manmade structures in satellite view, like the wrecked Costa Concordia. (Indeed, in his post on the Costa Concordia, Clive Thompson attributed the uncanny, eerie effect to a sort of perceptual vastness, to “the sheer immensity of the ship; it’s totally out of scale.”) And I’m awestruck by molecular biology, which is probably what attracted me to it in the first place.

So for me, at least, awe seems to be primarily about “perceptual vastness,” more specifically about bumping up against the edges of what my brain is adapted to understand. But I imagine the experience of awe is not quite the same for everyone.

What is awe-inducing, for you? What is awe, to you? Isn’t that a great question with which to begin the New Year? 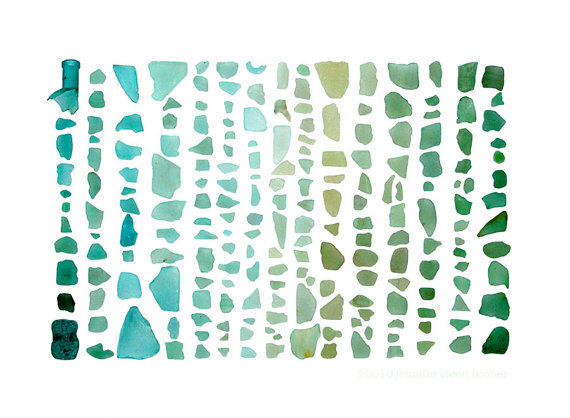 END_OF_DOCUMENT_TOKEN_TO_BE_REPLACED

Detroit-area musician Jeffrey Adam Gutt appeared on Simon Cowell’s talent show X-Factor last year, auditioning with a riveting version of Cohen’s “Hallelujah.” I don’t know if it’s better described as the broken howl of a faded rock star, or the desperate Hail Mary of a struggling artist who never got his break. Either way, it was wasted on the judges and he was inexplicably booted later in the season.

I just learned that he’s back on X-Factor this year; it’s going better this time and I hope he wins, although I don’t know if I can bring myself to watch a whole season of X-Factor to find out. He’s also finally released a single of “Hallelujah.” Yes, the video is unabashed ruin-porn. But if it weren’t over the top, it wouldn’t be a rock version of “Hallelujah”; after all, that song is to ruined Detroit churches as “Stairway to Heaven” is to everywhere else. And the guy can really sing. Enjoy:

Jeffrey Adam Gutt ‘HALLELUJAH’ from It's Collective on Vimeo.

His live audition was better — the audience response was electric — but I LOVE Jeff Gutt. I hope he gets to make a living making art for many years to come. And when he hits it big, I hope he remakes this video with cameos by Meatloaf and Bonnie Tyler.

Are there moths in the Uncanny Valley?

I love this meditative video. . . until the moth. It’s a skillful animation, but I feel like it’s going to start dancing with its little legs, singing “What the Moth Says.” Is this a case of insectoid Uncanny Valley? Can that even happen?

Liten from Liten on Vimeo.

I recently saw some of Lewis Tardy’s work at a show, and was impressed by the visual impact of his metal automatons against a dark background (particularly the moving pieces).

While it’s difficult to call his sleek, modern chrome pieces “steampunk,” exactly — they’re more like high-gloss H.R. Giger — they certainly partake of the steampunk aesthetic, as well as the anatomical aesthetic.

According to his artist’s statement,

The biomechanical styles of Lewis Tardy’s sculptures have evolved throughout a lifetime of experiences, creating life and motion out of static scrap metals. . . Significant inspiration comes from shapes and designs discovered within the found parts and materials, which takes shape in human and animal subjects alike.

While it’s hard to link directly to individual pieces on his site, my favorites include the found object assemblages “Fly-Tox” (navigate to Gallery -> Introspective) and “Black Rhino” (Gallery -> Animilia). The Mercury-like figure “Pacesetter” (Gallery -> Introspective) is particularly graceful, like a hood ornament on a vintage roadster. You can get your very own Tardy “Mosquito” for under $300 (navigate to Available Work). He had a “Mosquito” at the show, crawling up a wall of the booth, and it really was eye-catching.

Kate Lacour: challenging the Codex Seraphinianus in the category of surreal, faux-anatomical weirdness 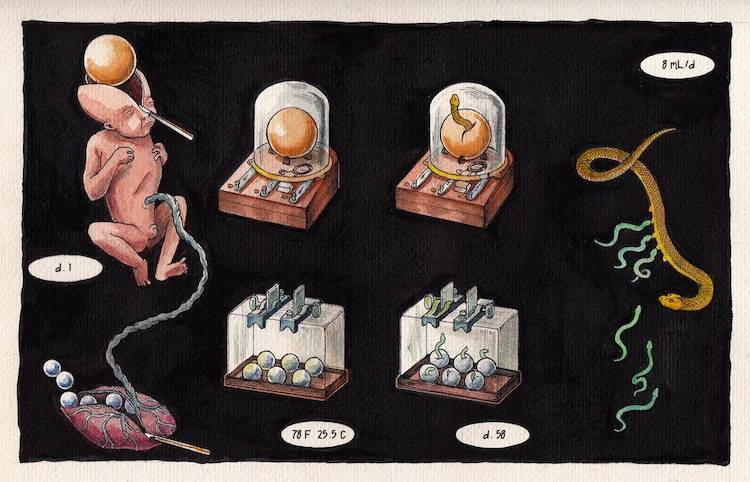 When Kate Lacour sent me a link to her tumblr, sharkbrains (subtitle: “Body horror beauty – art and comics”), I didn’t know quite what to expect. What I found was delightful – a modern successor to the Codex Seriphinianus. END_OF_DOCUMENT_TOKEN_TO_BE_REPLACED

PopSci: “Comments can be bad for science”

Popular Science just announced that they’re turning off reader comments on at least some science articles:

It wasn’t a decision we made lightly. As the news arm of a 141-year-old science and technology magazine, we are as committed to fostering lively, intellectual debate as we are to spreading the word of science far and wide. The problem is when trolls and spambots overwhelm the former, diminishing our ability to do the latter.

But even a fractious minority wields enough power to skew a reader’s perception of a story, recent research suggests.

The post goes on to cite research indicating that critical reader comments on an article — not criticism of a study’s methodology, mind you, but ad hominem attacks — tend to skew readers’ perception of the results described in the article. In other words, trolls cause readers to misunderstand science.

This won’t be news to most bloggers. Back when I was affiliated with Scienceblogs, I chose to turn BioE’s comments off for basically the same reasons Popular Science cites. BioE is about sciart, the place of science in our culture, and different ways of communicating scientific concepts (through art, and otherwise). It is ruminative, not persuasive. It should be a neutral, nonpartisan ground. Yet I saw the comments on my little blog routinely devolve into off-topic political/religious/ideological diatribes. In an ideal world (bracketing the well-worn debate about whether, as a practical matter, science is politicized) reporting on science should be truly objective and apolitical. Yet I saw the trend in commenting on my blog mirrored, to a much greater extent, on high-profile blogs that objectively reported scientific findings.
END_OF_DOCUMENT_TOKEN_TO_BE_REPLACED

Posted in Blogs and Blogging, Department of the Drama, Science in culture & policy, Science Journalism, Web 2.0, New Media, and Gadgets | Comments Off

Have you made artwork out of marine debris? The U.S. Department of State’s Bureau of Oceans & International Environmental & Scientific Affairs is inviting submissions to the “Marine Debris Art Challenge” (hosted at flickr). Entries must:

list your country, specify the area where you conducted your cleanup and include a TAG for the category (see below). TAG your best photo of your artwork with one of the following categories (you may submit one photo per category) . . . Plastics, Food Packaging, Lost or Abandoned Fishing Gear, and Other Debris.

The challenge organizers state that “The top pieces of artwork in each group will be announced on October 24, 2013, and featured with your name, country, and the location of the art on the U.S. State Department website and social media sites.” I’m told the art can be any form – a collage, for instance – but it must feature marine debris, i.e., manmade trash, that you have cleaned up off a beach or other waterway.Visit this link for the complete Challenge details.

October 5: NYC Festival of Medical History and the Arts 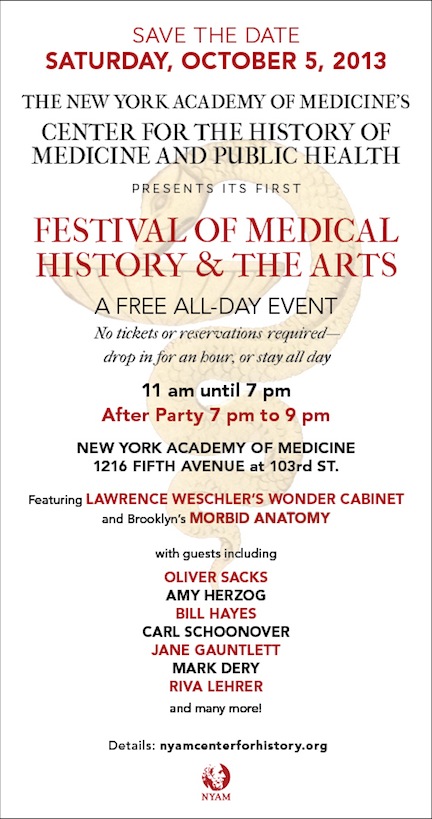 Due to some very unfortunate trip planning on my part, I will be on the other side of the country when some of my favorite people appear at the Festival of Medical History and the Arts in three weeks. Don’t be like me! More info here, including the schedule.

Posted in Blogs and Blogging, Education, Events, History of Science, Medical Illustration and History, Science in culture & policy | Comments Off

“Meat the Future”: The In Vitro Meat Cookbook 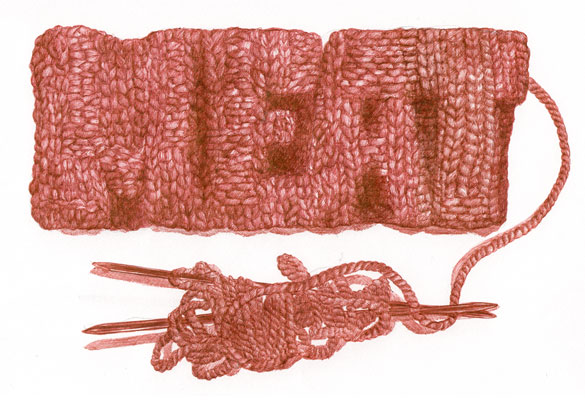 Those diehard dietary techno-optimists over at NextNature are preparing a speculative “In Vitro Meat Cookbook” to explore the outer bounds of what one might make from in vitro meat – such as dodo wings (I presume they taste like chicken), or meat ice cream (I don’t ever want to know what that tastes like). The cookbook is a conceptual art project, stimulating discussion of food policy and technology (“a conversation starter on the future of meat”), and not, I think, intended to be taken seriously as a cookbook by anyone. At least I hope not.

“Be part of the future of meat” by donating to this crowdfunded project at indiegogo.