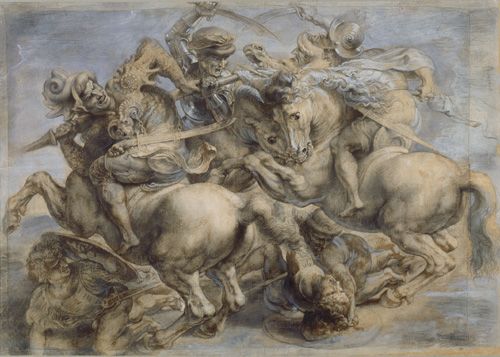 The Battle of Anghiari
Chalk, ink, watercolor
Anonymous and Peter Paul Rubens, after a lost mural by Leonardo da Vinci

Way cooler than the Da Vinci Code: an ex-bioengineer is trying to find a lost Da Vinci painting behind an Italian wall.

What makes it plausible: the painting definitely existed on a wall in the palace five hundred years ago. The artist who supposedly painted over it, Vasari, wrote of Leonardo:

Occasionally, in a way that transcends nature, a single person is marvellously endowed by Heaven with beauty, grace and talent in such abundance that he leaves other men far behind, all his actions seem inspired and indeed everything he does clearly comes from God rather than from human skill. Everyone acknowledged that this was true of Leonardo da Vinci. (Vasari, Lives of the Artists).

Could the man who wrote that really have destroyed a work by Leonardo?

What makes it less likely: Leo, ever the experimentalist, tried to use an encaustic technique which failed spectacularly, leaving large sections of the unfinished painting in ruins. Was there even anything remaining for Vasari to preserve?

Zoom in to explore the amazing details of armor and anatomy in Rubens’ copy.

This entry was posted in Artists & Art. Bookmark the permalink.

One Response to Another da Vinci Mystery