This essay has been reposted at the new bioephemera, Feb 19, 08. 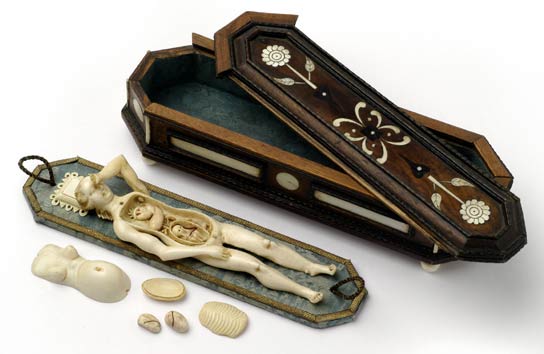 Kunstkammer Georg Laue is a Munich antique/art gallery informed by the sensibility of the “wonder cabinets” (kunst- or wunder-kammer) of 17th century Germany. One of the interesting objects described on the site is this ivory model of a pregnant woman with removable parts, including internal organs and a fetus.

Such dissection models may seem incongruous to modern eyes – the perfectly clean, white ivory cadaver not only has impeccably coiffed hair, a hinged arm allows her hand to rest delicately against her forehead as she reclines on a small lace-trimmed pillow! She’s clearly dead, with a little inlaid coffin for a case, but she’s more like a puzzle box than a body.

17th-18th century medical illustrations offered a variety of odd perspectives on the pregnant female form. A more clinical approach prevailed in Jan van Rymsdyk’s 18th-century illustrations for atlases by William Smellie and William Hunter. (Please be aware that if you’re not of a medical bent, you may find the illustrations below the fold unpleasant.)

Rymsdyk’s illustrations focus tightly on the gravid uterus, to the exclusion of nonessential anatomy; the cadaver’s thighs are not merely truncated, they are presented in sharply detailed cross-section, like joints of meat in a butcher’s stall.

Gravid uterus at full term
Engraving, after drawings by Jan van Rymsdyk
From The anatomy of the human gravid uterus exhibited in figures,
by William Hunter (1774)

It would be hard to arrange a more unsentimental view of the womb! Yet Rymsdyk’s glistening engravings are stylized in their own way – they’re hyperrealistic, impeccably clean, free of the gore that would obscure both dissection and birth. Rymsdyk’s motive is clarity rather than sentimentality, but his illustrations end up as starkly artificial as a bleached lace pillow.

In soft, semi-translucent colored wax, artists achieved more realistic results. Some of the best examples are Clemente Susini’s wax anatomical models, made between 1803 and 1805, which are documented in detail at the website of the University of Cagliari. The Cagliari collection includes two obstetrical models very similar to Rymsdyk’s engravings. (Wax models served as realistic, life-size teaching examples when pregnant cadavers were unavailable, and were still created as recently as the 1940s).

Susini also sculpted waxes more reminiscent of Zick’s style than Rymsdyk’s. His “Medical Venus” in the collection of La Specola at the University of Florence (Museo di storia naturale) represents a popular type of model displayed for the edification of 18th century audiences. Unlike the Cagliari models, or indeed other models in the La Specola collection, the most dramatic La Specola waxes depict entire nude bodies. The “dissection” is restricted to the trunk, which can be un-lidded to reveal removeable organs. Like Zick’s ivory doll, Susini’s attractive Venus reclines against a white cloth, her hair curled. When the “lid” is closed, a string of pearls even adorns her neck. 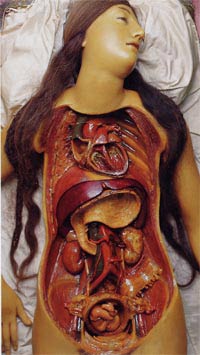 But unlike Zick’s ivory model, the Venus does not appear to be dead. Her eyes are open and her head is tilted in an attitude that has been variously described as drugged, ecstatic, resigned, or aroused. Other waxes at La Specola display similar expressions (see below). Although we find this apparent vivisection grotesque, the stuff of horror films, the 19th-century audience were probably more comfortable with such a surreal portrayal than they would have been with clinical realism. Reclining, drowsy nudes were common artistic subjects, and by giving his female nudes a classical, theatrical flourish, Susini may have been sidestepping the anxiety and taboos associated with dissection and violation of a corpse.

A ceramic torso by Manfredini also selects a surreal mode of presentation. Manfredini’s subject actually holds the folds of her own dissected abdomen open, as the layers of her dermis drape and mingle visually with the cloth of her robe. Her face gazes upward thoughtfully, and her attitude seems to be calm, solicitous desire to help the viewer examine her viscera (including uterus, intestines, and two very accurate oviducts). One can almost imagine her tilting her pelvis to afford a better angle to the onlooker! 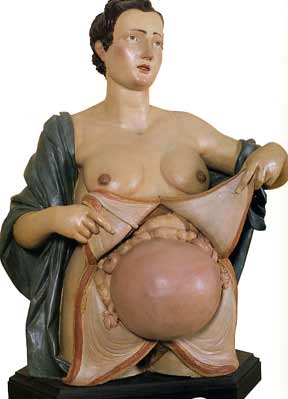 These examples are part of a long tradition of placing anatomical specimens in “normal” social contexts; skeletons and partially flayed men are frequently depicted walking, posing, and conversing in illustration and sculpture. But male specimens were usually exhaustively dissected, which had a dehumanizing effect. Susini’s skinless, hairless male waxes at La Specola do not appear nearly as “alive” to us as his females, who served to demonstrate the few organs unique to their gender, and remained otherwise attractive and whole.

18th century obstetrical models represent women simultaneously as ideals of graceful femininity and as puzzle boxes of removable parts. The modern viewer may well find them bizarre; the detailed portrayal of their hair and jewelry seems irrelevant, incongruous, or macabre, and the overtones of vivisection are disturbing. In the words of my anatomy students, Rymsdyk’s unsentimental approach to anatomy is “gross” (literally), but Susini’s Medical Venus is “twisted.” Annette Burfoot, in a thought-provoking article that conveys the experience of visiting La Specola, calls the collection “a visual feast of gore and the erotic” and argues that the waxes are the earliest “‘cinematic’ representations of the body as liminal subject between fear and rationality—key components of the horror genre.”

As a society, we become uneasy whenever medical knowledge is taken out of a sterile, dehumanized context. Two recent traveling shows, “Body Worlds” and “Bodies: The Exhibition,” which use actual, plastinated cadavers in a variety of poses, have been predictably plagued by controversy. Bodies:The Exhibition has special problems with the provenance of its Chinese cadavers, but both shows have been criticized for turning anatomy into theatre, or treating human bodies as artistic raw material, to be posed and composed for dramatic effect. Body Worlds reportedly makes a special effort to avoid offending visitors with its one obstetric exhibit (a third-trimester female who voluntarily donated her body for this purpose) by moving it away from the rest, behind a curtain. Entertainment, education, or exploitation? One thing’s certain: anatomy and art remain awkward partners.

Clemente Susini’s wax anatomical models at the University of Cagliari