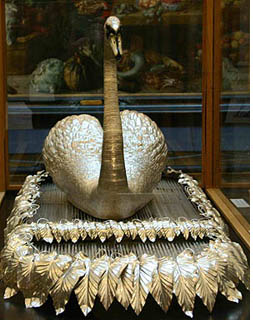 There is something primally captivating about the successful reproduction of life in art or technology. The Bowes Silver Swan is a wonderful example, dating back to the 18th century. To the accompaniment of a tinkling music box, the life-size swan moves its head, preens, and appears to catch a silver fish (which is really concealed in its throat) out of the glass “stream” it rests in.

This YouTube video captures the swan in surprisingly good resolution, but even better, it captures the genuine childlike enthusiasm of the rapt museum-goers watching the swan’s performance. Apparently we haven’t been totally jaded by CGI – not yet, at least!

John Bowes bought the Swan for 200 pounds in 1872; the Swan is first recorded in an account from 1773, and was made by, I kid you not, someone named John Joseph Merlin. Normally, the Swan performs once or twice daily at the Bowes Museum, but on Friday, Jan. 25, 2008 it will be taken off display for an expert analysis of its three clockwork mechanisms. It is expected to return to catching fish the following day.

Ironically, real swans eat insects, tadpoles, and vegetation, but not fish, so far as I know.

6 Responses to The Bowes Silver Swan