A Murmuration of Cheese Balls: when nature enters the Uncanny Valley

Murmuration, in addition to being a perfectly lovely word, also captures one of the most wonderful phenomena one can encounter in nature. Behold, one of the loveliest viral videos of recent years:

Did you get goosebumps?

Thomas Jackson’s series “Emergent Behavior,” with its clever, irreverent portrayals of flocking behavior, both evokes and pokes fun at the majesty of the murmuration. Jackson’s swarms of quotidian, inanimate objects, like Post-it notes and Solo cups, gather for inscrutable purposes: a cloud of glowsticks on a beach (is it glowstick mating season?), or Post-its suspended like fireflies in a thin band just above the summer grass, or the colony of cheese balls below, perhaps in search of a new hive: 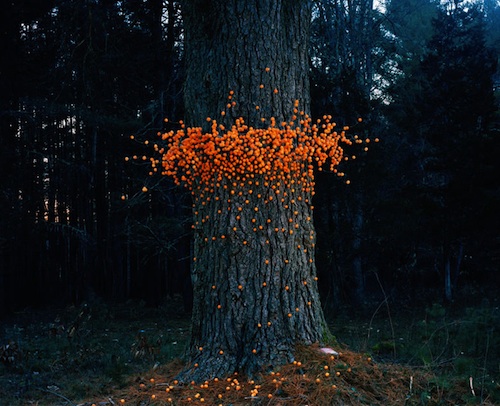 Jackson’s patterns are evocative of natural, biological phenomena; placed in a natural setting, they seem both eerie and humorous. Jackson says he intends to “tap into the fear and fascination” evoked by murmurations and other self-organizing biological phenomena. It’s an interesting turn of phrase: we are fascinated by these phenomena, but do we “fear” them? Does the transmutation of individual starlings into a wooshing thunderhead on fast-forward actually terrify us?

No doubt Alfred Hitchcock would have something interesting to say on this topic. For me, The Birds‘ creepiest scenes are not those featuring attacking flocks, but rather those in which lone sentinel birds eye the protagonists, or smash themselves inexplicably on a door. Perhaps Hitchcock’s ragged, marionnette-like flocks — mere shadows of real murmurations — were simply too unconvincing to scare. (It may be high time for The Birds to be remade, using biophysical flock-modeling algorithms — but please, let it be by someone other than M. Night Shyamalan).

But special effects aside, the “fear” evoked by a murmuration of the type in the video above is more dignified and deep than popcorn-munching, shrieking B-movie terror. It’s an emotion inflected with awe. It’s the fear in “God-fearing”: fear intermingled with reverence. Consider the first two OED definitions of the noun “awe,” and see if their language isn’t apt:

1. Immediate and active fear; terror, dread. Obs.
2. From its use in reference to the Divine Being this passes gradually into: Dread mingled with veneration, reverential or respectful fear; the attitude of a mind subdued to profound reverence in the presence of supreme authority, moral greatness or sublimity, or mysterious sacredness.

When I’m lucky enough to witness dramatic natural phenomena (or even something as quotidian as an undiluted, infinitely deep, mountain night sky – c.f. Hungry Hyaena, on the Hubble telescope), I’m struck by an overwhelming sense of immensity, mystery, and awe-fulness. (Unfortunately, I thought The Happening was not awe-ful, but awful. There’s a big difference.) Awe manifests in chills and goosebumps — but I’m rarely afraid for my physical safety. To the contrary, murmurations, starry skies, and similar phenomena tend to make us less conscious of our bodies, blurring scale and time, reminding us how insignificant we are: an effect viewed by many as profoundly spiritual and sublime. Christopher Reiger at Hungry Hyaena, who writes often on the intersection of nature, art, and spirituality, says succinctly “the incomprehensible grandeur of the cosmos is intoxicating.”

Setting aside debates over the precise meaning of “fear” vs “awe,” Jackson is right that we have a visceral response to murmurations, swarms, and other self-organizing activity. One might say we see such phenomena as “uncanny” or unnatural — even though they are some of the most purely natural phenomena we encounter in an increasingly urban world. I think Jackson’s cheese ball swarm, or his Post-it murmuration, is intriguing because witnessing artificial objects self-organizing in an apparently purposeful, biological manner is not necessarily weirder than seeing starlings or slime molds do so. It struck me as somehow less weird, in a way: if I came upon a glowing, hovering cloud of Post-it Notes in a forest, that would be profoundly bizarre, but I wouldn’t be awestruck — I’d assume human agency was at work, and start looking for the Banksy wanna-be with an engineering degree. But when I come upon a cloud of fireflies, I still get goosebumps. The difference is visceral, not logical.

This brings me to the Uncanny Valley, that oft-cited brainchild of Japanese roboticist Masahiro Mori (I always want to type “Memento Mori”). Decades ago, Mori theorized that

a person’s response to a humanlike robot would abruptly shift from empathy to revulsion as it approached, but failed to attain, a lifelike appearance. This descent into eeriness is known as the uncanny valley. (from the preface to a translation of Mori’s original article).

The Uncanny Valley effect/hypothesis got little traction forty years ago, but in the past few years it’s become nearly ubiquitous, especially in discussions of digital effects (“Critics were quick to point out the eerie look of the characters in ‘Polar Express.'”). Apparently nonhuman primates experience it too, though there’s no consensus yet on why the effect would be evolutionarily adaptive; some critics dismiss the whole thing as “an unsupported theory that has morphed into a nerdy breed of urban legend.” But unsurprisingly, that doesn’t stop mainstream media from citing the Uncanny Valley as a universal explanatory framework, for everything from scary clowns to Mitt Romney (how can he “inexplicably turn voters off despite looking like the textbook image of an American president”?).

Because the Uncanny Valley concept is thrown around so loosely, I didn’t realize until recently reading a translation of Mori’s original article, that his assessment of how “lifelike” a robot was (and therefore how uncanny it would seem) was largely focused on movement — specifically, our innate affinity for human-like movement:

Movement is fundamental to animals—including human beings—and thus to robots as well. Its presence changes the shape of the uncanny valley graph . . . because of a variation in movement, something that has come to appear very close to human—like a robot, puppet, or prosthetic hand—could easily tumble down into the uncanny valley.

It’s not just about whether an airbrushed Mitt Romney has pores on his skin, or whether a virtual character’s hair has been rendered with lifelike, elastic springiness. A robot that looks human, yet moves in an inhuman way, should be extraordinarily creepy: like a person possessed, or like the skittering, jerky ghosts in Japanese horror films.

It seems plausible that we think of the most familiar animals, the ones we tend to anthropomorphize, as within a sort of “curtilage of humanness.” This would include dogs, cats, and common birds: we’re familiar with them from young ages and have certain expectations of them. Birds are expected to be skittish, bright-eyed bundles of feathers. When birds instead begin to act like gears in an amorphous machine rehearsing the choreography of physics or mathematics, they slip along the slope of their own Uncanny Valley. Rather than automatons moving in a creepily humanlike way, they’re animals moving in a creepily inhuman way. Richard Barnes’ photographs of murmurations are strikingly beautiful, but are they uncanny, in the way the video above is? I don’t think so. It’s the unpredictable, mathematical movement of the murmuration that’s eeriest to me. And it’s eerie because I can’t grok how or why birds are able to move like that.

I don’t mean to suggest that a murmuration is inherently mechanical or robotic. Not at all; I probably think of it that way only because science fiction is my readiest referent for the synchronous, instantaneous coordination of individuals into a unified “superorganism” (murmurations as Transformers, and/or Borg, perhaps?). The preternatural speed with which birds orient themselves is certainly closer to a precision machine than a human’s sludgy reflexes, but one could alternatively describe the movement as insectoid: like the rippling, invisible motion of a centipede’s long legs, or the lightning zig-zags of a spider fleeing across the wall. (The spider-like movements of ghosts in modern Japanese horror films are a very effective, very insectoid use of the Uncanny Valley).

My point is that whatever we choose as an analogy – artificial or natural – the movement is unlike human movement. It’s strange to think of a familiar, nonthreatening domestic animal like a bird (especially a ubiquitous urban pest like the starling) acting like that. We relate to birds,* and we don’t fear them, which is why it’s freaky when birds go all Hitchcock on us. But while it’s creepy when birds act as if they are possessed by malevolent anthropomorphic spirits, it may be even more creepy when they’re not being anthropomorphic — because then we lose our tenuous affinity with them. A common starling is awfully messy and awfully predictable. A murmuration is an awe-fully inscrutable natural force.

I poked around briefly online to see if anyone was writing about the Uncanny Valley as applied to bio-organizational behavior, but the only discussion I found was in a blog post by John Robb, who argues that unmanned “drone swarms . . . creep most people out. It feels unnatural. Evil.” Robb’s take on the emotional impact of a drone swarm is likely inflected by his feelings about drone use in war and surveillance (I’d never call a swarm of quadrotors that look so much like multicolored Lego helicopters innately creepy or “evil”). But Robb’s point is that the drones’ self-evident creepiness is provoked not by the likeness to human movement (as with the Uncanny Valley), but rather by their likeness to animal movement (arguing for a sort of expanded Uncanny Ecosystem, perhaps?). I don’t agree, because as a few of his commenters point out, we do find the natural motion of many animals to be creepy (snakes, spiders, etc.). I don’t think it’s about what’s natural, but about the scope of the human comfort zone.

Mori proposed, back in the day, that the Uncanny Valley effect could be

In other words, the Uncanny Valley may be all about healthy, self-preserving fear. Perhaps it was originally fear of dangerous species or human corpses; perhaps it makes perfect sense that today if that fear is provoked by our own feats of engineering (surveillance drones, robots) or by natural phenomena that — given our exceedingly rare opportunities to glimpse them — seem even stranger and more distant than technology. This is speculation built on anecdata, of course — but Thomas Jackson is on to something, with his statement about “fascination and fear.” And it’s fitting that the murmuration itself is another strategy for self-preservation.

Framing the murmuration, a quintessentially natural phenomenon, as an example of the Uncanny Valley effect underscores how our relationship with nature is inevitably filtered by human experience. A robot is not uncanny because it is unnatural or artificial. We see it as uncanny because it lies outside the boundary of what we identify, and accept, as human. It is the boundary between human/inhuman, not natural/unnatural or technological/biological, that drives many of our most visceral and problematic responses. And while some may find the inhuman (or superhuman) aspects of nature most wonderful (and/or awe-ful) evidence of a deep connection with nature, we are inevitably relating to nature based on its otherness, and we feel affinity or familiarity for its wonders only on our own terms.

Mori’s translated article on the Uncanny Valley is here.

*I realize many people hate “messy, awful starlings” and wouldn’t say they “relate” to them at all. But a) it’s hardly apparent from a murmuration what kind of bird is involved, so I don’t think our relative affection for starlings as opposed to sparrows or chickadees is necessarily all that controlling; and b) I think the fact that starlings are so commonly vilified in anthropomorphic terms generally supports my argument. Also, I do not have an opinion on the question of whether murmurations were historically common or uncommon, prior to human intervention/urbanization; I simply don’t know enough.