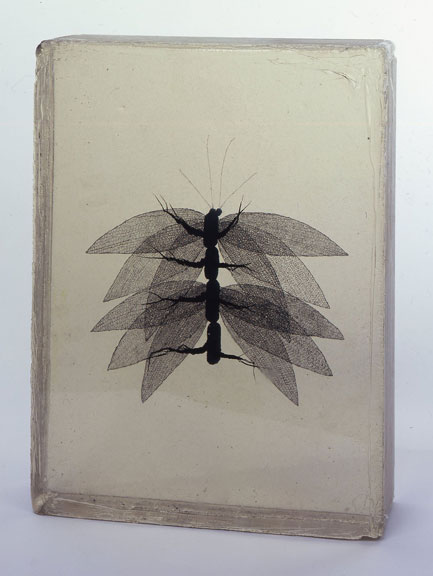 Resin blocks are commonly used to preserve medical specimens so they can be viewed from all angles without the prgressive fragmentation of a specimen suspended in solution. But in artist Dustin Yellin’s hands, resin is used to deceive: “specimens” such as the one above are not really solid objects, but illusions created using ink. And although the result is convincingly 3D, like a true biological specimen, it can defy classification. Consider the Pecoxus above – is it flora or fauna? Are those skeletonized leaves or the brittle wings of an insect?

According to Culture Catch,

The art of Dustin Yellin is a cross between painting and sculpture, science and science fiction. His magical objects, some taller than the viewer, are comprised of dozens of layers of resin that are meticulously painted with acrylic and inks – layer atop layer – until a sinuous “life form” appears that looks like it would be at home in sea, sand, or air.

Each object is a comment on nature, genetic experimentation, color and form, culminating, in this reviewer’s mind, in some of the freshest and most distinct art being made today. I was reminded, even before I saw the exhibition’s title, of suspended animation because these works are expressions frozen in time. And they have an otherworldly feel, like encapsulated specimens brought back from space exploration, that gives the entire installation a strange viral cast. (source)

It’s absolutely exhausting imagining the process that must go into Yellin’s work. My favorite is this one, which reminds me of some kind of transdimensional alien overlord from Dr. Who. . .or wait. . . is that the Eye of Sauron?

Thanks to peacay for yet another heads-up on this one!