Memento mori: cadavers in the classroom 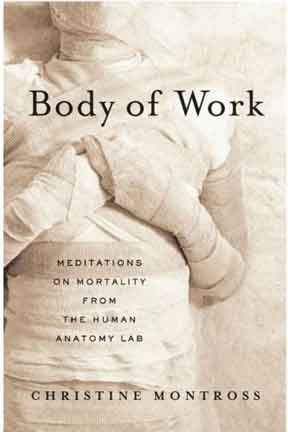 The LA Times recently reviewed Body of Work: Meditations on Mortality from the Human Anatomy Lab

, a memoir by medical resident Christine Montross. I’ve been trying to decide if I want to read it, and I’m still uncertain. Although a relative novice when it comes to medicine (my degree is in molecular biology), I taught anatomy using human cadavers, and have dissected them. I never found cadavers the least bit disturbing. But I may be unusual in my detachment – my students reacted with disgust, distress, nervousness – and constant anxiety that their reactions weren’t normal.

But what is normal? How should we relate to a donated cadaver in the anatomy lab – as a person, or a thing? Some reactions seem to be universal – gallows humor, for example. Humans have been laughing at death since long before Shakespeare. (What other weapon do we have? Death always wins, and the cadaver’s the un-living proof of it.) We have some general rules of conduct – for example, treating the cadaver with respect, keeping the pieces of the various cadavers separate, covering face and genitals when they are not being examined. But such rules seem to be mostly for the students’ comfort, since it’s hard for a cadaver to retain modesty or dignity, at least in a traditional sense, when skin is missing and viscera are exposed.

Students respond to cadavers in personal ways, based on their own family histories, so one student’s experience of dissection is unlike any other’s. Everyone sees the cadaver differently: is this a person, or a patient, or a body, or a teaching specimen, or an illustration. . .? When students take limbs from a skeleton and hold them up to their own arms, turning them to determine the correct orientation, they enact a little unconscious ritual: memento mori. One student was fine with the cadavers until her grandmother passed away; after that, she found the cadaver so disturbing she couldn’t be in the same room with it. The boundaries of life and death, previously comfortably clear, had blurred intolerably. Before class began, students came to me, concerned that they might find the body of a deceased relative in the lab: when and were and who, they wanted to know. (Why came much later.)

Montross’ book takes on some of these issues. As reviewed by Harvard professor, poet and doctor Rafael Campo,

“Body of Work” is at its best when Montross, who is also a poet, allows us to observe the astonishing beauty her dissection reveals, and to relish the language she uses to describe it. “The language of these bones slides along their edges,” she writes. “Os coxae, the hip bones. Their three parts, with names like flowers: ilium, ischium, pubis…. The pelvic brim, as if water spills over it…. Brim, arch, spine. The ligament names like a call to prayer: sacrospinous, sacrotuberous. Sacrosanct.”

This wonder cabinet of anatomical language is familiar to any biologist. It is indeed beautiful. So is the body it describes. But Campo rebukes Montross for allowing such language to establish a clinical distance between herself and the life history of her assigned cadaver, “Eve:”

I believe it is the depersonalization first modeled for aspiring doctors in their encounters with cadavers that accounts for much of the lack of professionalism and career burnout in physicians, and the callous treatment patients too often receive nowadays.

Really: studying the body as beautiful, complex object is a precursor to treating living patients callously? I have never known anyone to leave an anatomy lab feeling less respect and wonder for human beings than before they began. Yet Campo wants the anatomical curriculum to explicitly address the spiritual, not just the physical:

In this age of frequently misapplied technology, here is a chance to make productive use of video cameras and monitors: Might not a video of Eve, telling of her life and created at the time she decided to donate her body, help mitigate some of the mistreatment Montross documents, as well as the subsequent distancing she (however uneasily) comes to approve?

A pleasant idea – and what I’d expect from the author of The Desire To Heal: A Doctor’s Education in Empathy, Identity, and Poetry. Empathy should be part of the training of doctors and nurses alike. But is anatomy lab the right venue in which to share the life history of a cadaver? Personal details would increase the discomfort of beginners – in my experience, overly powerful empathy for the deceased disrupts their ability to cut and handle the body (a point Campo seems to dismiss). Would cadavers without life stories receive less respect or care than those who had documented their lives?

Isn’t the point that regardless of our living identities, whether we are good or bad, our bodies are kin, after death and in life? When the cadaver was alive, it was home to a unique mind. Now that its cells are dead, is its role in the laboratory to elegize that mind – or to represent universal anatomical mechanisms? As a biologist, the answer seems fairly clear. Perhaps a doctor feels differently; I don’t know. But I was disappointed as Montross appears to conclude her book by backtracking from scientific objectivity to elegaic ritual (with Campo’s approval):

Great teacher,” she intones, “I give you flowers. I carry your body to the funeral pyre. When you burn, may every space in you that I have named flare and burst into light.” Thus she aligns herself with the humane tradition of honoring the dead, and the act of love inherent in tending to them. The detached concern she professes to want to emulate seems refreshingly absent here. Perhaps, in recognizing our universal and very human contradictions, there is hope for the beleaguered medical profession, after all.

Honestly, this leaves me cold. I can’t speak for anyone else, but if my body ever ends up in a cadaver lab, I don’t want people intoning poetry to it. I want them to dissect it. And yes, I said “it,” not “me.” I’ll be dead. My body is a wonderful clockwork, but it ain’t me.

The imagined ritual may be beautiful and humane, but it is a pleasant fiction, meant for the observer, not the observed. It has nothing to do with the cadaver’s living identity – we have no idea who “Eve” was, nor if she even desired commemoration. Most importantly, the manifest beauty of the human body doesn’t require validation by tradition or flowers (or words). We don’t have to turn a cadaver into a spiritual symbol to make it a wonder: it already is wonderful, even in death. And if someone fails to understand that, I doubt they should be practicing medicine at all.

This entry was posted in Biology, Books, Education, Science. Bookmark the permalink.

6 Responses to Memento mori: cadavers in the classroom