Dope vitality and sets up the moral! What were we waiting for? 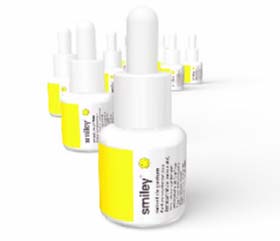 I first encountered a reference to Smiley aromatherapy products in Jane magazine, which raves in typical Jane-ish style:

Tech-y jargon aside, the scientists behind this blew right on past aromatherapy by isolating scentless molecules that react in your brain to “activate happiness” – then they threw them in yummy-smelling body stuff.

To me, it sounded like the Smiley “scientists” blew right on past science. So I checked out the website, www.happytherapy.com. According to the site (a native english speaker needs to join the staff, pronto):

In order to have everyone smile, even the most stubborn, smiley entrusted science with the composition of an olfactive substance with euphoriant bio-mechanics. It is in nature that the components of this psycho-active cocktail were drawn. Thanks to research undertaken worldwide by scientists on the tangible benefits of aromatherapy, Smiley isolated the ingredients recognized for their stimulating capacities and assembled them for the first time in a perfume.

Smiley contains monoaminated alkaloids having a pharmacodynamic action called phenylethylamine and theobromine. Phenylethylamine is to passion what endorphin is to love. It sets off a feeling of joy, excitement and euphoria. Theobromine blocks the receivers of adrenalin and thus decreases the effects of stress by a comfortable feeling of wellbeing. These two cardiotonics associated together dope vitality and sets up the moral. It’s that simple! What were we waiting for to flood these beneficial molecules on everyone?

Basically, they claim the happy-making effects of the products are mediated by PEA and theobromine. So why not just eat some chocolate? Theobromine, a cousin of caffeine, is found almost exclusively in chocolate (although chocolate is commonly thought to be full of caffeine, milk chocolate actually has little caffeine relative to theobromine). PEA, a naturally occurring neurotransmitter in our brains, is also found in chocolate. Although the evidence isn’t overwhelming, some people think cravings for chocolate may be a form of self-medication for slight depression.

But chocolate is a complex cocktail. In addition to PEA and theobromine, it also has anandamide, various alkaloids, and tyramine. There’s a lot going on in a chocoholic’s brain, and it’s unclear if the same effects would result from the lotions, self-tanners, deodorants, and perfumes in the smiley line. Can PEA and theobromine be absorbed cutaneously at effective levels? I have no clue (according to wikipedia, PEA is actually a skin irritant with a fishy odor. . . ).

And the texture and flavor of chocolate add significantly to the pleasure of eating it. I had a mindbogglingly good chocolate mousse on Friday and I was in seventh heaven; the nutella wrapped in pizza dough that followed was a major let-down. Both chemically chocolate, but hardly equal in pleasure.

Incidentally, since theobromine is what makes chocolate toxic to dogs (they metabolize it more slowly than we do), dog owners should keep these products safely in the medicine cabinet. Or just eat some chocolate instead. I think I will.

PS. Update: Retrospectacle has a post on caffeinated soap – a similar idea. Supposedly it works, but I don’t think I’ll be trying it.

This entry was posted in Biology, Frivolity, Science. Bookmark the permalink.

2 Responses to Dope vitality and sets up the moral! What were we waiting for?