Jeff Schwarting didn’t like the pre-fab plastic look of commercial ant farms, so he designed a farm of his own and put it on Kickstarter. His farm uses “space gel,” which serves as food source, water source, and tunneling medium.

I’m sure “space gel” sounds impressive to kids, but it doesn’t look that exciting unless it is lit dramatically or dyed neon colors. These strategies are used in various commercial space gel farms, ranging from rainbow color-changing farms to cylindrical farms that cast “ant shadows”. I’m pretty sure that if I kept looking, I could find an ant farm lava lamp. That would be quite the desk accessory/conversation piece.

Standing in stark contrast to these ant laser light shows, Jeff’s “jar farm” is a simple glass mason jar containing pebbles and colored gel.  After his Kickstarter campaign concluded, he made the jars available here. Unfortunately, at $40, the jars are surprisingly expensive – the same price point as some commercial illuminated gel farms with ants included.

If your budget doesn’t provide for a $40 ant jar, why not consider the ant jar a form of bio-design DIY inspiration? What other clear containers would the ant gel work in? What might you suspend in the gel for tunneling ants to discover – dinosaurs? A 3D spine? A Han Solo action figure? And who knew ant farm innovation was even a thing, much less a thing requiring a minimalist design response?

I must be old and Luddite: if I were making an ant farm, I’d rather just put dirt in a jar. I’m aware that by doing so, I would just play into yet another DIY trend: the ubiquitous terrarium, apartment-friendly grandbaby of the Wardian case. Why aren’t ant farms getting the same design love as terraria? Has anyone even tried putting a space gel ant farm in a $300 Restoration Hardware geodesic glass terrarium?)

Personally, I recommend buying this kit, adding it to an ant farm of your choice (if you go with gel, please use red gel), and watching “giant” ants battle a zombie horde.* Now that would be an awesome ant farm. 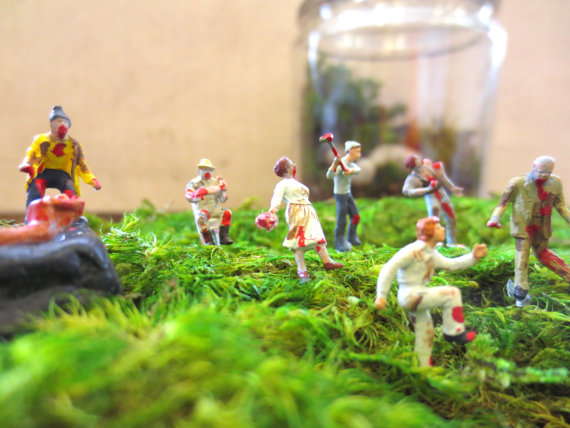 *This type of recommendation is one of many reasons I have not been given my own HGTV design show.