Jewelled skeletons: how Damien Hirst was scooped 500 years ago

Remember when bad-boy artist Damien Hirst got all that press for covering a human skull in diamonds? According to a new book by Paul Koudounaris, Heavenly Bodies: Cult Treasures and Spectacular Saints from the Catacombs, he was about 500 years behind the curve. Apparently many skulls — in fact, entire skeletons — were similarly bedazzled in the wake of the Reformation. 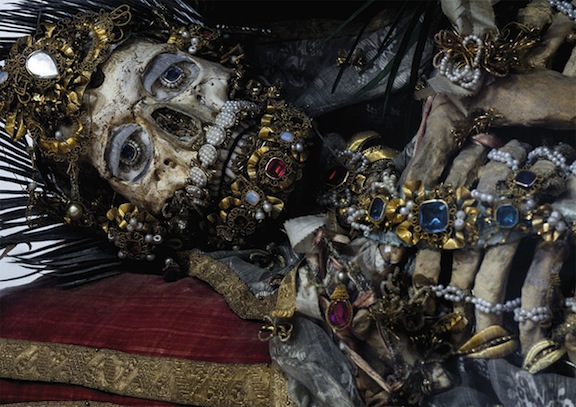 The skeletons, which were thought to belong to early Christian martyrs, were dressed in ornate costumes. In addition, as seen in this gallery of images (unfortunately rather low-res), as well as the photos on the book’s Amazon page, they were ornamented with gold-set jewels in their eye sockets, heavily ringed hands, and crusts of pearls and gemstones where lips would have been.

The book is not yet out in the US, although it is available for preorder (release date October 8). According to its Amazon description,

Death has never looked so beautiful. The fully articulated skeleton of a female saint, dressed in an intricate costume of silk brocade and gold lace, withered fingers glittering with colorful rubies, emeralds, and pearls—this is only one of the specially photographed relics featured in Heavenly Bodies.

In 1578 news came of the discovery in Rome of a labyrinth of underground tombs, which were thought to hold the remains of thousands of early Christian martyrs. Skeletons of these supposed saints were subsequently sent to Catholic churches and religious houses in German-speaking Europe to replace holy relics that had been destroyed in the wake of the Protestant Reformation. The skeletons, known as “the catacomb saints,” were carefully reassembled, richly dressed in fantastic costumes, wigs, crowns, jewels, and armor, and posed in elaborate displays inside churches and shrines as reminders to the faithful of the heavenly treasures that awaited them after death.

Paul Koudounaris gained unprecedented access to religious institutions to reveal these fascinating historical artifacts. Hidden for over a century as Western attitudes toward both the worship of holy relics and death itself changed, some of these ornamented skeletons appear in publication here for the first time.

Thanks to long-time BioE friend Miles for the tip.