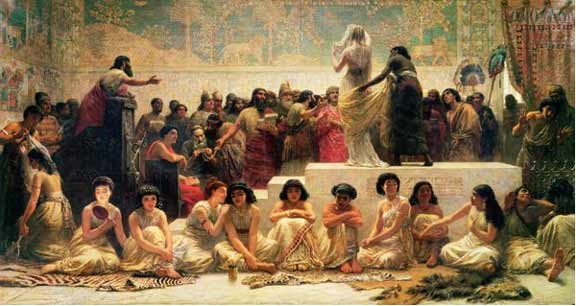 Damien Hirst is, as usual, hot hot hot. Even hotter than July in the era of global warming. But in Prospect Magazine‘s article Doubting Damien, Ben Lewis compares Damien Hirst with the Victorian artist Edwin Longsden Long (above). Long’s work “seemed original and urgent” and sold for sensational prices in his own time, but is now ignored. Will the same thing happen to Hirst? Lewis isn’t sure:

Landing back in the Valley and surveying a lifetime of accumulated bric-a-brac freshly liberated from storage lockers, Vallance hit upon the idea of the reliquaries as a medium to communicate the meaning with which he felt these leftover trinkets to be imbued. While artists, by definition, tend toward narcissism, Vallance’s quirky, candid, self-deprecating humor and unfailing irony diffuse the hubris to the point where the reliquaries can be read as an encyclopedic parody of artists’ (and our entire culture’s) materialist self-absorption. (LA Weekly)

Surprisingly, this actually sounds worth seeing: the “relics” are less bombastic than Hirst’s, more quirky and individual, such as Vallance’s “very early piece of complex political intervention, when he painted the shells of backyard snails with crude American flags in order to thwart his patriotic stepfather’s gastropodicidal wrath.” It’s the hallowed-yet-disturbing-American-childhood context that makes A Christmas Story a sacred text.

Over in The New Criterion, we have a rant by Roger Kimball: “why the art world is a disaster.” I tried to get into it, but was immediately derailed by the author’s gratuitous slam of Bard College, a small liberal arts college that is ranked about the same as my own much-beloved alma mater:

Bard is one of those small educational institutions whose ambient wealth has allowed them to substitute avant-garde pretense for scholarly or artistic accomplishment. If your bank account is healthy (tuition and fees for first-year students: $47,730) and young Heather or Dylan is “creative,” i.e., not likely to get into a Harvard or Yale or Williams, then Bard is a place you can send them and still look your neighbor in the eye.

Angry much? He goes on, more to the point,

When it comes to art, Ms. Hessel is neither a risk taker nor a risk giver. Like Bard itself, she simply mirrors the established taste of the moment. Far from “challenging” or “subverting” the status quo, the 1,700 objects she has accumulated are the status quo. And far from “struggling” with questions about gender or feminism or anything else, she has simply issued a rubber stamp endorsing the dominant clichés of today’s academic art world. “Academic,” in fact, is the mot juste: not in the sense of “scholarly,” but rather in the sense that we speak of “academic art,” stale, conventional, aesthetically nugatory.

I might agree with Kimball if he weren’t so condescending, but my hackles are up, so you’ll have to read it and judge for yourself. Unless you, too, went to a small liberal arts college, in which case you may take a pass.

Finally, I was crushed to learn that the manufacturer of the technological lights of my life, my MacBook Pro and my iPod nano, is blatantly ripping off artists in its advertising. Now, we know other companies steal from Apple all the time (a la the iGasm), and Apple products have shifted the entire design market over the past decade, but that’s all the more reason Apple should really be above this kind of derivation. Naughty Apple. (I forgive you, of course, darling.)

This entry was posted in Artists & Art. Bookmark the permalink.